Warning: post is low on words, high on photos.  With a 7 month old, not only do I not have time for a wordy post, but I don’t have the head for it either!  Writers block :)

I think as soon as I found out Lucy was a going to be a girl, I brought my old rocking chair home from my parent’s house.  It had been sitting in storage for about 20-25 years, just waiting for a make over and for a new little book worm!

I was a little rough as a child and broke off the arms, so first things first, patching and sanding was in order! 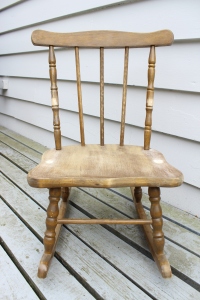 After a few rounds of patching and sanding, I primed it grey on the lower portion, and white on the top.   I started by painting the center section of the spindles gold.  And then taping it off.

In retrospect, I would have done the gold last.  The tape kept taking off the metallic shine, so in the end, I had to tape off the cream and coral to repaint the gold band.

Here she is coral, cream, and blue painters tape!

And Voila!  My favorite part, pealing back the painters tape to find the crisp lines.  My heart melts a little when I see it in the corner with her books. 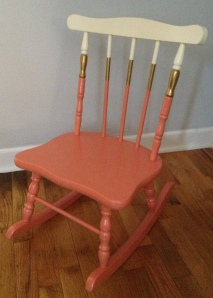 And I couldn’t resist a few photos in use! 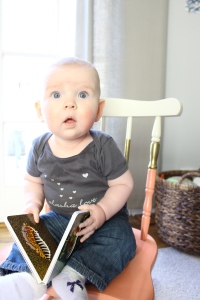 Let’s be honest…it’s not like she crawled up there on her own with a book in hand.  I’ll admit, slightly staged :)