This is our original house, in a photo taken by the city of Seattle in 1940

But at some point in the last 70 some years, one of the owners decided to do an addition, and tacked the living room on to the end of the house like this 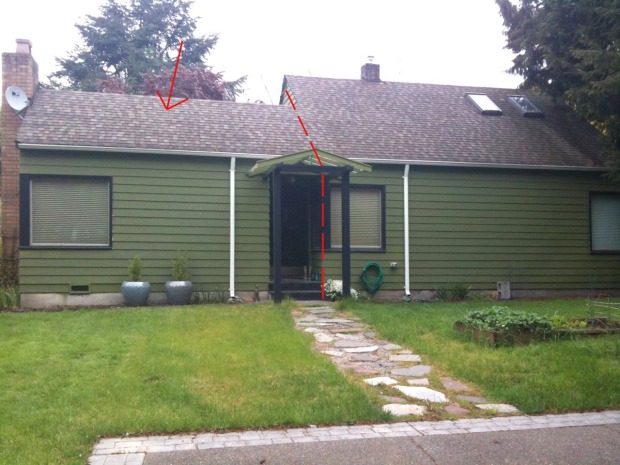 Totally awkward!  They removed the cute front door and just put siding over it!  And then to match, just put a window on the opposite corner!  Don’t get me wrong, I love having the extra space, but there are so many ways that they could have done this while retaining some of the original charm.  Our challenge now is to up the curb appeal without sinking a lot of money into it.  Isn’t that everyone’s challenge…make it look better for no extra money?

I’ve decided that there are a few issues here going on.  The first obvious issue is the window placement.  And because the windows are on the corners, the gutters were placed on the front of the house, and not to mention – totally off center.  The second issue is that there is no dimension.  It’s a flat yard stretching straight up to a flat house.

We’ve played around with the idea of a porch or trellis, but I’m not 100% sure it will solve the problem.  I keep going back to the awkward windows, and I think that if they could just be repositioned it would greatly improve the look.  Obviously a new paint job would be needed as well.  The front of our house was sided with a particle type board that has water damage, so new siding = new paint!

Since we moved in 1 1/2 years ago, I’ve been on the look out for inspiration homes that 1. have a similar shape, 2. that I like the look of, and 3. that wouldn’t require a lot of money to emulate.  You would be surprised how difficult it’s been, until I stumbled upon this! 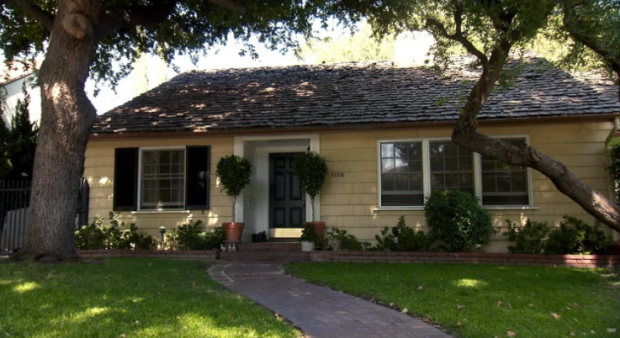 I don’t know if anyone would recognize it, but it’s the house in the first episode of “The League,” which PS I highly recommend.   I think that it is adorable, homey, and totally attainable!  I don’t know if I’d go yellow or with shutters, but I love the front door.  The white around the front door alcove (which we have too) makes it look so much more inviting and definitely adds the dimension that our house is lacking!  So this is my goal!  It’s not going to happen over night.  I’d be thrilled if it even happened in a year, but this is my direction!