Where have I been?  I’ve been here…just building a deck.  This was a long process.  Jesse and I only have Sundays to work on house projects, and then maybe are able to squeeze in an evening now and then.  And during the week, I only have 2 days of nap time.  So this deck building was really cut up and spaced out.  I think I prefer quicker projects :)

This deck has been the longest biggest project that we’ve tackled.  It seemed simple and straightforward in theory…in theory only.  But 3 months later, we are finally able to fully enjoy our new deck.  I thought it was going to be a month, and then another half month to re do the lawn (which we decided against)  Most days, lately, have been way to hot to be outside, but we’ve sneaked out there in the mornings and evenings…and it’s glorious!  It’s been the most rewarding though, so at least there is that!

I’ll start by just posting the before and after.  I think it’s the nice thing to do, so you aren’t forced to go through dozens of process photos, though I definitely purged many photos :)

Our VERY before.  This was pre house painting, but I sure do long for that green lush grass.  The summer heat has killed everything in our yard. 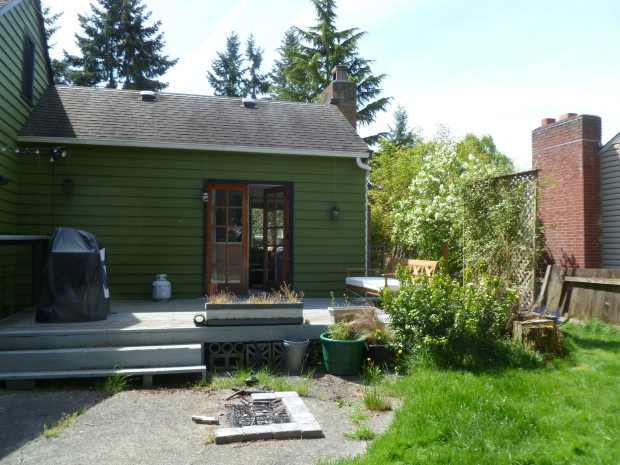 You can see there is a set of stairs that were about 6 feet wide.  The rest was just a drop off.  We thought it would be really nice to open up the deck to the yard by building stairs the full length of the deck.  It would also add some alternative seating. 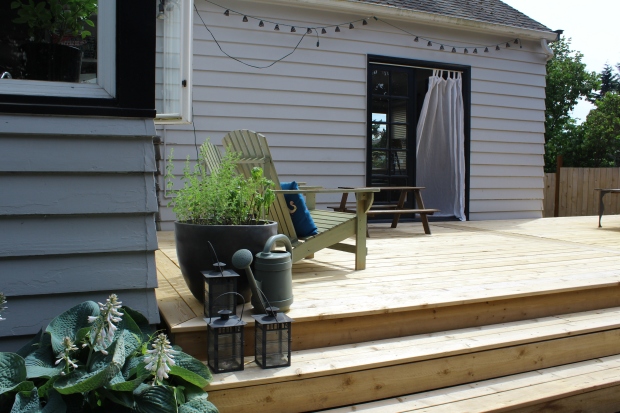 Here is a long string of process photos, if you are at all interested in the long painstaking process of building a 16×25′ deck!  With a little commentating in between.

First Day (April 6th)!  Look at that smile, he has no idea what we are getting ourselves into! 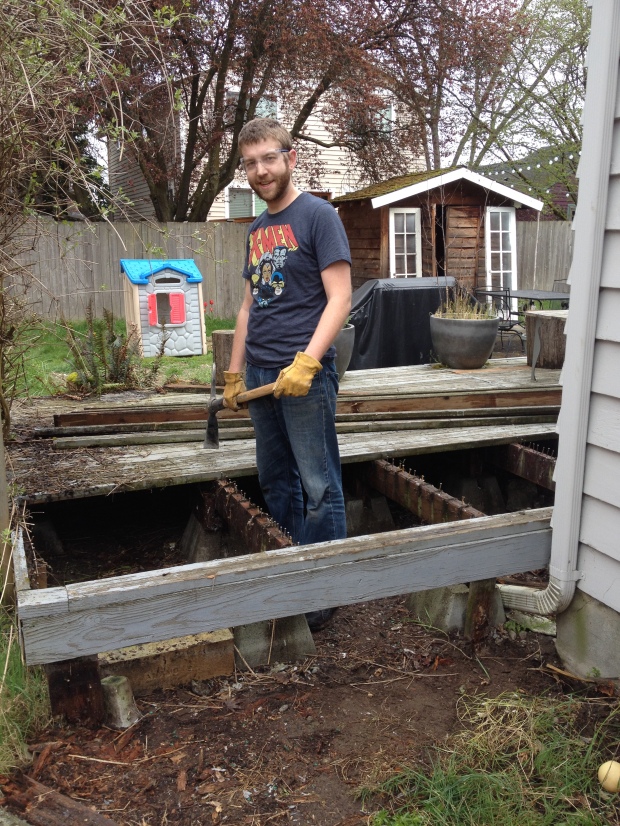 It became obvious pretty quickly that this was going to be full deck overhaul!  My favorite was how nothing was really secured down.  The posts were just resting on the concrete blocks.

Hate the all the gross rubble, still need it hauled away! 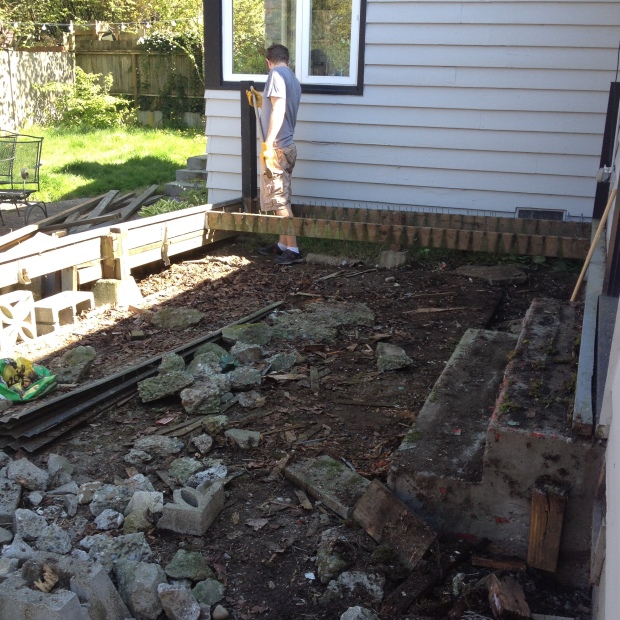 At this point we got everything cleaned up, figured out where the old patio was, and where we could pour new supports.  It was in this stage that we finalized the design, and got all the materials ordered. 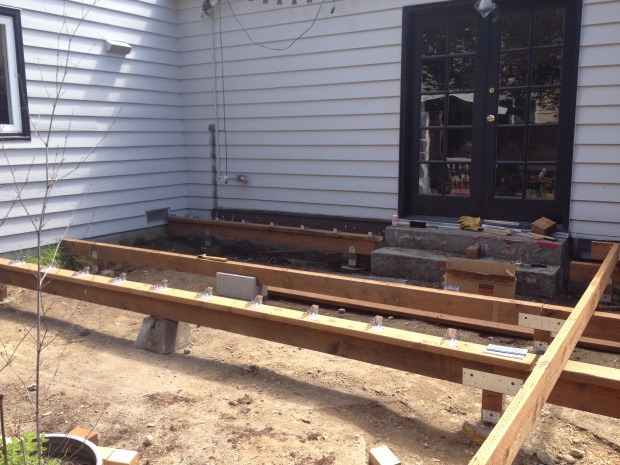 I like this one…it’s the pose/look of “how are we going to put this together.” 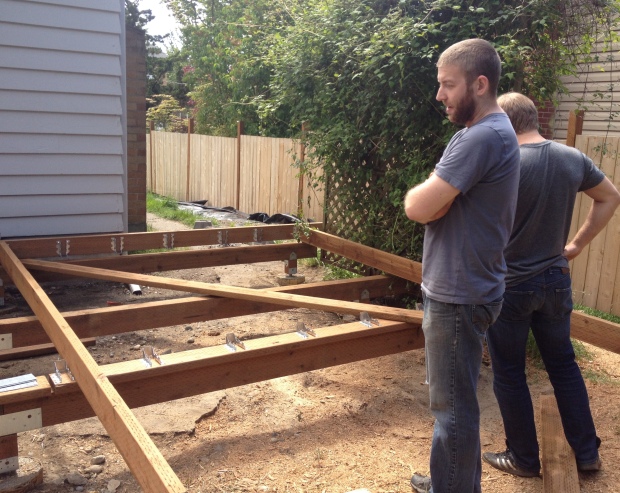 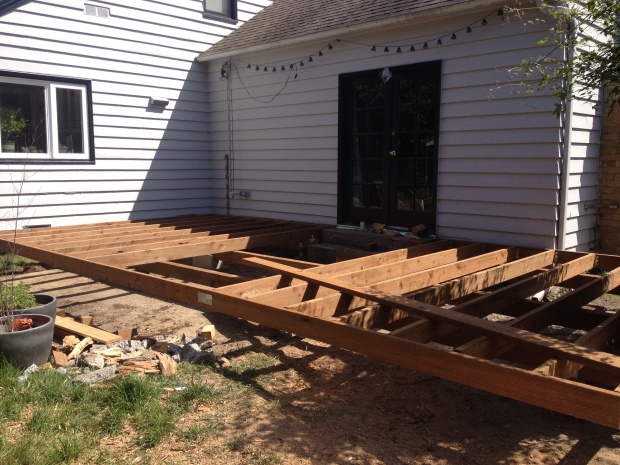 Then we had to figure out stairs.  The original plan was to build them individually and have them be about 18″ deep, but with the poured patio, there was no way to pour a landing or any footings.  Luckily we were able to buy pre-made stringers, though all 26 had to be cut, each individually depending on the slope of the ground, it was a VERY slow process. 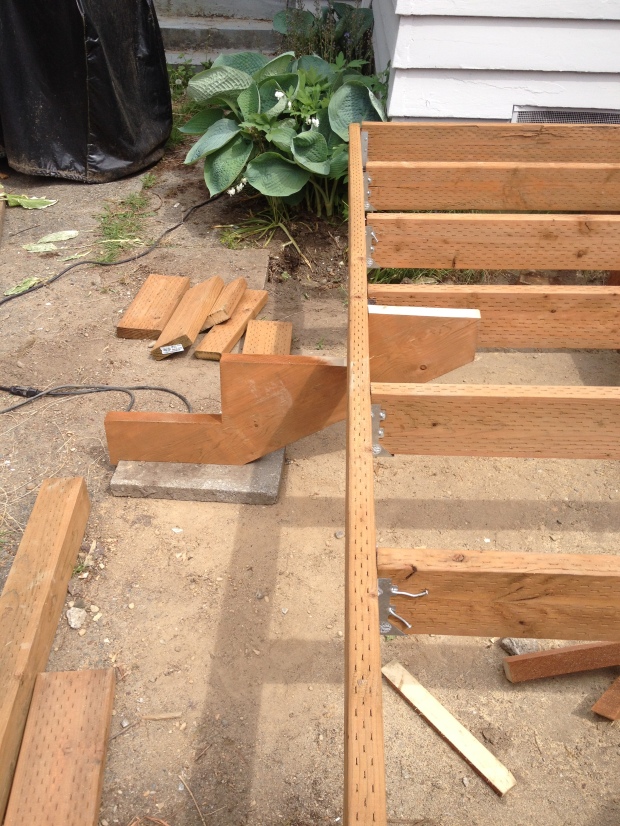 This was a bit of a milestone – our first outdoor dining experience.  It also marked the beginning of putting decking down.

You can see in this picture how the sun just beats down on the deck.  It gets full sun from about 11am until 6pm.

I did 2 frames running along the outer perimeter.  That was 16 45degree cuts, which was 16 too many, PAIN!  But after that, it was all straight cuts.  2 planks ran down the center of the deck, dividing it into 2 sections 11.5′ sections that just had to get filled in.  It took about a day to just get them spaced out evenly.  I had drilled pilot holes through the planks, and lightly nailed them in place spacing them out. 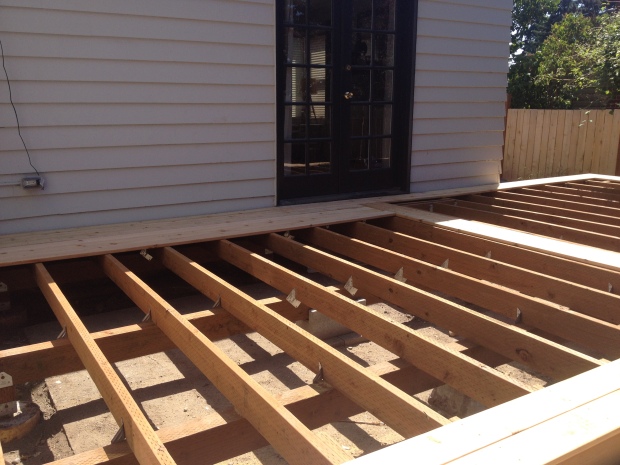 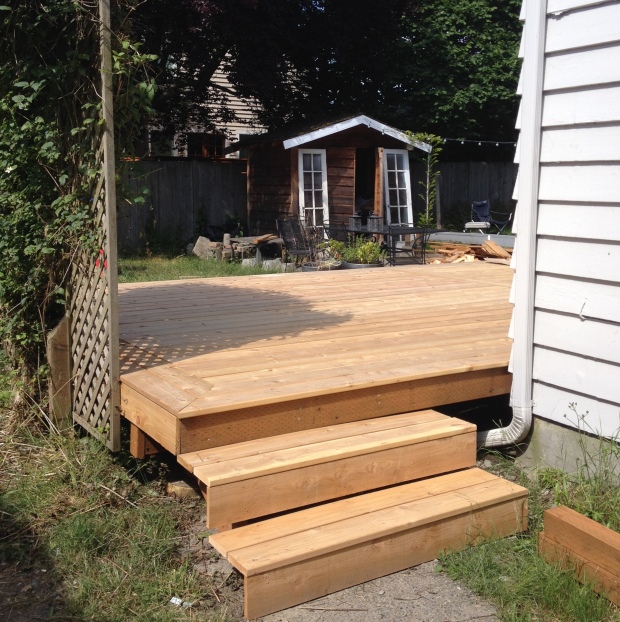 And then, before we knew it…3 months later, we had a finished deck!

All the furniture is a few years old, but Lucy did score herself a new picnic table!

Hope you are all enjoying the summer!